Hello to everyone who still haven’t forgotten my blog exists) I haven’t either, by the way) And I even have some pictures to show you) And Andrew has a couple too – he liked the idea of shooting himself using a tripod and a remote control:

Isn’t the light from my window incredible? With all that snow and cloudy sky it’s perfectly white)

So, as I said before, last fall I got addicted to handmade. Well, the more I made, the more I wanted to make)) In the beginning it was only sewing, because it was something I learned to do a veeery long time ago, and as the time went by, I’ve been sewing some little things now and then. You might remember that in August I made a new lining for my favorite bag, well, after that I made some pouches, simple scarves, repurposed some of Andrew’s old t-shirts – some little projects that required the smallest amount of sewing skills.

It got worse when I decided to sew a corset top. I found the similar pattern in Burda magazine, and took it as a base for the pattern of my top. It took some quality time, but I’ve finished it eventually, and of course I’m in love with it) I think it’s mostly because of the fact that even being made by me, it still looks accurate and nice)) I haven’t taken any HQ pictures of it though, so I guess you just have to believe me)

Anyway, it was the moment when I felt that I really can sew something good and nice. And then sweet dreams about tons of gorgeous dresses and skirts and pants and tops and corsets rushed over my head 😀 Of course, I haven’t sewed any of it yet, but I’ve already bought 13 meters of tulle to make the Carrie-Bradshaw-dress-of-my-dreams, and now all I need is to put myself together and start to work with it. It’s really the hardest part because working with so much tulle just scares me 😀

But still, I made a bunch of pretty things in the last 3 month) For Natalie’s birthday I made her little pouches for her iPods and iPhone. The smallest one was for the Shuffle 4G. Though I knew the dimensions of the device and made a pouch at least 2 cm wider , it was so tiny I was afraid the iPod won’t fit in – I didn’t realize how small this new Shuffle really was until I saw it, and this cute tiny pouch does fit it perfectly 🙂 Btw, I’d painted the fabric myself, and than drew the ornament on it using a fabric marker (and I got the idea when I saw this tutorial on How About Orange ).

When the iPod pouches were already all done and wrapped, I was doing my daily browsing through One Pretty Thing, and I found a very simple tutorial on making a quite useful and pretty thing – knitting needle roll – by Made by Loulabelle. As some of you may know, Natalie is a knitter, so I immediately knew I just have to make this for her – I knew that she probably had kept her knitting needled just lying around in some box unorganized, and I only needed a few hours to put this roll together. I even was lucky to find an amazing fabric of three colors I wanted – orange, chocolate and light beige – that perfectly matched an orange fabric from my stash))) I also made a little matching tote to keep a work-in-progress projects in it) (you can find a simple tutorial on making a little useful tote on Make It and Love It 🙂 )

So, here is the knitting needle roll (sorry for the LQ picture of the tote):

Later I made the same one for my Grandma (who is a lifetime knitter) for the New Year. And the rest of NY presents for my friends were plaid PJs for Natalie (of which she’s been dreaming for a while) and cute apron for her sister Irene (which was inspired by gorgeous Cupcake Aprons by Jamie Christina) with matching placemats, coasters and a chef hat). Shame on me, I still haven’t took any pictures of it. Hope I’ll show it sometime later)

Natalie also made me a handmade present – she knitted me a hat! I love it) Here it is:

A few days later I saw in my rss something about crocheting – and I was crocheting a lot when I was about 10 years old (though I never was patient enough to knit) – which made me go find a hook, a yarn leftover and crochet a simple flower. I just wanted to remember how it’s done I guess. I found a pattern for that flower on Ravelry – the ultimate website and community for knitters and crocheters: if you are one, you should definitely sign up! And then I thought – maybe I can crochet something more than a flower? I started searching for the crochet patterns on Ravelry, and guess what – you can crochet everything you want 🙂 I dig into our very very old yarn stash and found one skein of raspberry colored wool yarn, found a pattern of a beret, and it took me about three hours to crochet it. The yarn and its color are amazing, though I’m not sure that I like the style of the beret… maybe I’ll change it to something else someday.

A couple of days later I decided that I should definitely try knitting as well – and here I am! I’ve already bought a bunch of knitting needles, some yarn, and the first thing I made was summer hat that is crocheted, but has knitted rib. I’m sure I knitted the rib longer than I crocheted the hat 😀

While a was taking pictures of it yesterday I couldn’t resist from taking a couple with Alison (though she wasn’t really into it). And finally the color of her fur looks right on picture)))

Of course, I needed something to keep my knitting needles and hooks in, so I sewed a case for it. It was inspired by the absolutely gorgeous ones by Atelier de Soyun. I love the result)) Here it is:

I guess I can say I’m really into handmade now) I hope I will make everything that I’ve planned to make so far, though I don’t know how I’m gonna find so much free time to do it 😀 Guess I will finally have to organize my life))) 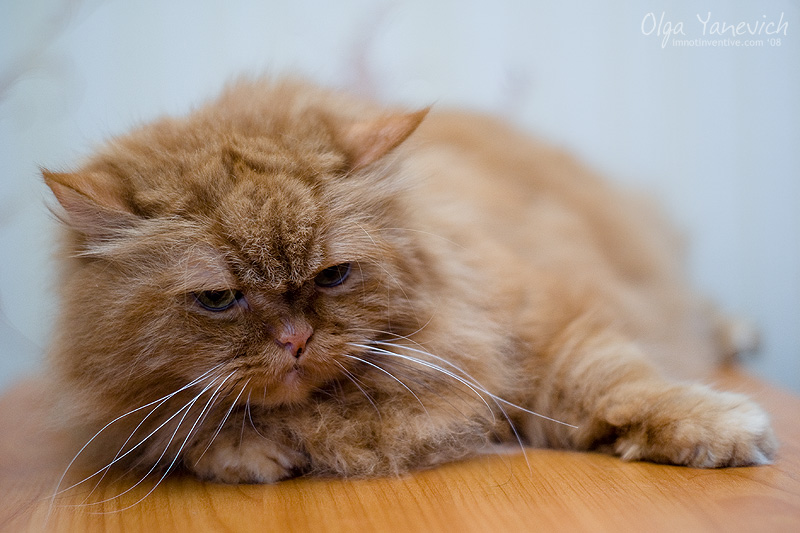 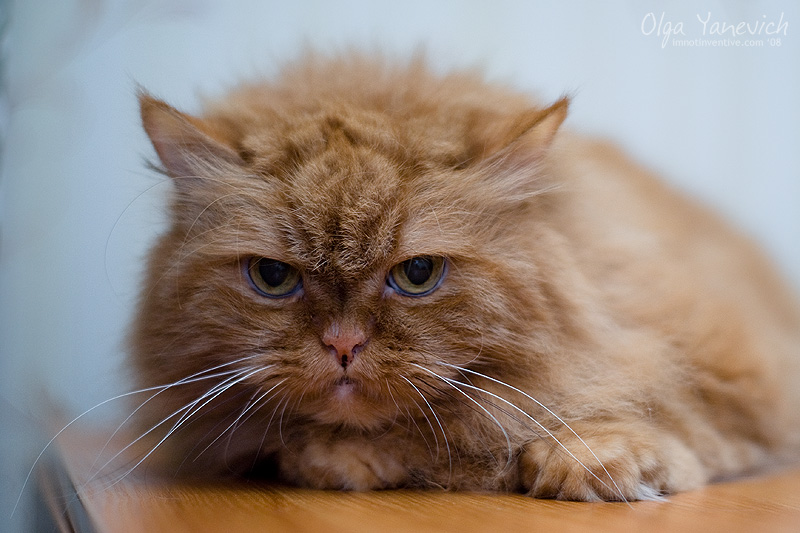 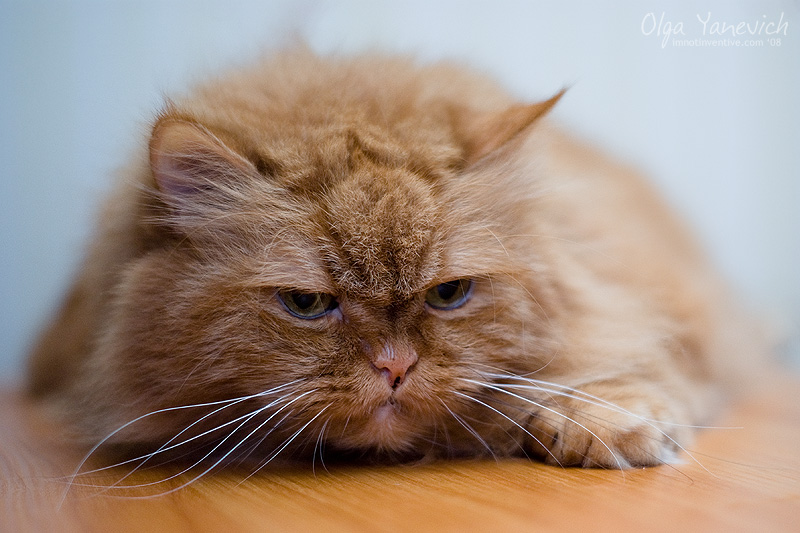 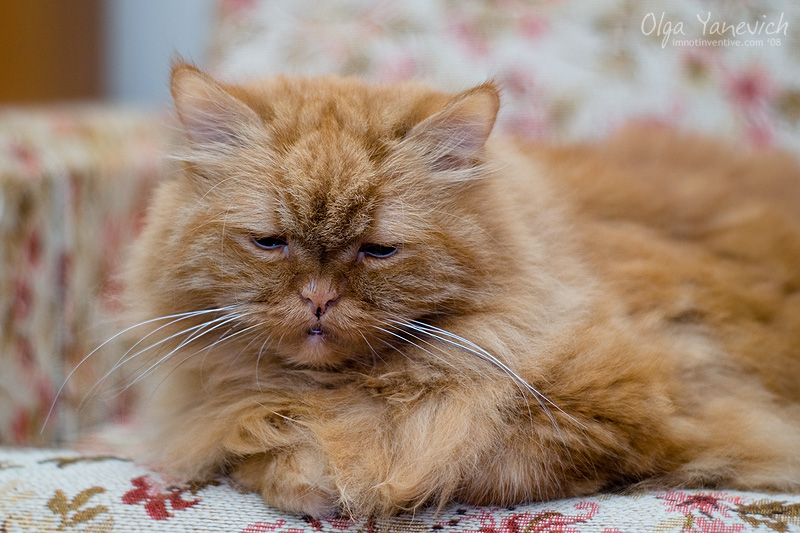